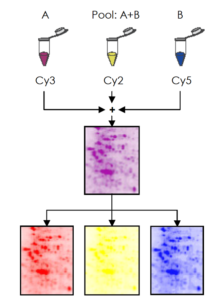 The system uses fluorescent cyanine dyes covalently bound to the proteins prior the 2D gel electrophoresis process. The dyes (CyTM2, Cy3 and Cy5) are mass and charge-matched, but have unique fluorescent properties. Therefore the labeled proteins migrate simultaneously on the 2-DE gel but still produce distinct excitation and emission spectra.

This means multiple protein samples labeled with different dyes can be co-migrated on the same gel. The gel is scanned using an adapted fluorescence scanner or camera system to generate overlaid, multi-channel images for each gel.

The advantages of the DIGE technology using an internal standard are:

Analysis of DIGE experiments in MelanieTM

The DIGE version of MelanieTM integrates functionality that fully exploits the advantages of DIGE (and other multiplex gel electrophoresis techniques):