The relevance of your image analysis results will depend on the design of your experiment and the use of a statistical model that takes into account the structure of the data. Experimental design must be carefully considered before commencing any practical work. The purpose of this guide is to:

We recommend the references below for a more in-depth review of experimental design applied to proteomic analyses.

An experiment deliberately imposes a treatment on a group of objects or subjects in the interest of observing the response.

A factor of an experiment is a controlled independent variable; a variable whose levels are set by the experimenter. A factor is a general type or category of treatments. Different treatments constitute different levels of a factor. In the example above, Drug A, Drug B and Drug C constitute the three levels of the factor ‘Medication’.

Experimental design is the process of:

The primary goal of an experimental design is to avoid bias, that is, systematic errors in statistical inferences about the populations. Second, it ensures that the experiment is efficient, that is, it minimizes the random variation for a given amount of cost.

The three fundamental principles in the design of an experiment are: randomization, blocking and replication.

Randomization refers to the order in which the trials of an experiment are performed. A randomized sequence helps eliminate effects of unknown or uncontrolled variables.

As an example, imagine the Biased design in the figure below. It seems that the Controls have lower spot volumes than the Cases. But this effect might be due to the order in which the gels were run (e.g. differences in lab temperature on different days, potentially leading to proteolysis of certain proteins). Randomization ensures that biases caused by aberrant and unknown experimental artifacts cannot affect the conclusions inferred from measurements, by allowing each combination of experimental unit and sample applied to it, an equal chance of being affected by these artifacts. 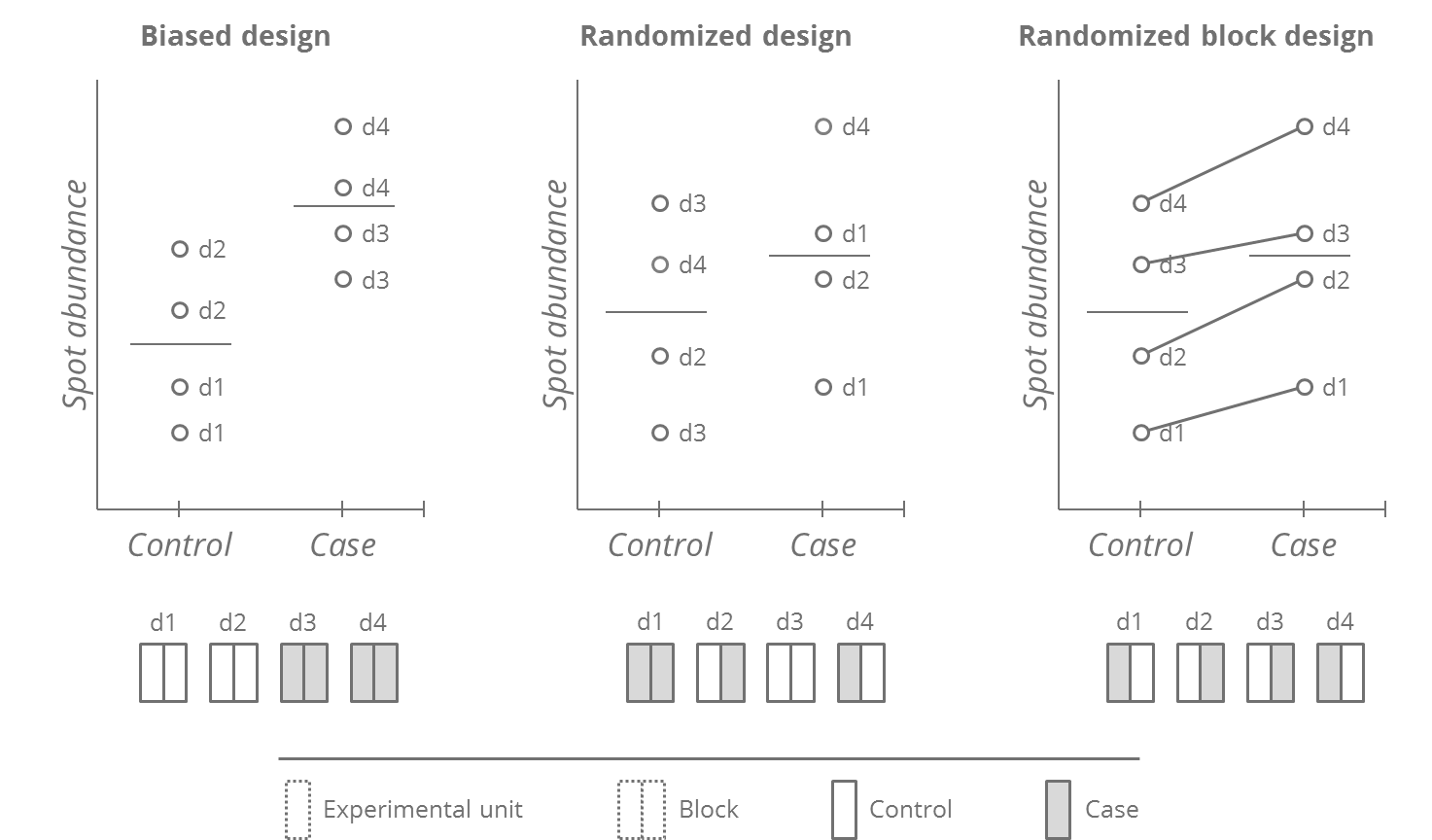 Blocking helps reduce the bias and variance due to known sources of experimental variation (nuisance variable).

The Randomized design in the above figure has two drawbacks. Randomization can potentially produce unequal allocations (assigning more Cases toward days 1 and 2), and inflate the variability within each group by a combination of the biological and of the day-to-day variation. This may make it difficult to detect the true differences between groups. Randomized block designs enforce a balanced allocation of treatments between blocks (in the example, a block is a day). They do this by first dividing the experimental subjects into homogeneous blocks before they are randomly assigned to a treatment group. The use of an appropriate statistical model can further provide block-corrected estimates of the difference between Cases and Controls. Indeed, the figure shows that despite large within-block variation, case-control differences are consistent.

A particular example of blocking often used in 3-dye DIGE experiments is dye-swap, where it is recommended to evenly distribute the treatments between the Cy3 and Cy5 dyes.

Note that a paired design is a special case of blocking, in which the blocks are individual subjects. For example, a study that measures protein expression before and after taking a drug would form blocks in which each subject would be within his or her own block and would base the analysis on the difference in each subject’s spot abundances before and after treatment.

An experiment contains replication if the same treatment is applied independently to two or more experimental units. It allows one to assess whether the observed difference in a measurement is likely to occur by random chance.

In the figure below, without replication, it is impossible to say whether the observed difference between Controls and Cases represents the true difference between the populations, or if it is an artifact of selecting these specific individuals, or of the measurement error. Replication allows to distinguish these situations. Increasing the number of replications also results in a more precise inference regarding differences between treatment groups. A larger number of replicates may allow to demonstrate a treatment effect, despite large variation.

Fixed factors (or fixed effects treatment factors) have levels that are assumed to be fixed (reproducible). Inference is restricted to those levels of the factor that were included in the study. The parameters of interest are the treatment effects.

Random factors (or random effects treatment factors) have levels that are assumed to represent a random sample of the potential levels within a well defined population. Inference is directed to the population. The parameters of interest are the variance components.

Random effects factors are rarely used in 2D gel electrophoresis experiments, and Melanie does not support them. The software assumes that all factors studied are fixed effects treatment factors.

When there is only one factor in a design, there is no need to worry about crossing and nesting. But when there are at least two factors, you need to understand whether they are crossed or nested, because it will affect the analyses you can and should conduct.

A carefully designed experiment can still be wasted if subsequent statistical analysis does not take into account the structure of the data. If, in the illustrated randomized block design above, one ignores the paired allocation of experimental units within a day and compares average spot abundances in each group, one does not improve the ability to detect the true differences.

On the other hand, the number of possible designs, and the applicable statistical models, are virtually unlimited. It is not possible or even sensible for Melanie to attempt supporting all statistical test models. Dedicated statistical packages exist for that.

Therefore, Melanie only provides specific statistical support for a few common one- and two-factor experiments that are described here. For experiments that have been designed to study three or more primary factors, or that integrate more advanced design notions, you can still align and detect your images, filter, edit and normalize spots, and use some of the statistical tools for exploration. However, for such experiments, we strongly advice you to export your data for appropriate statistical analysis with third party software, under the guidance of a statistician.