The images in your experiment must be aligned to remove the positional variation inherent to the electrophoresis process. After alignment, a given spot in one image should be in the same location as the corresponding spot on another image. Alignment is critical in the image analysis process. If the images are not properly aligned, the resulting spot detection and quantification will be invalid.

Not all images in an experiment are equally easy to align. Often, images that belong to the same treatment group are most similar. In other cases, spot patterns from gels run with identical experimental conditions (same run or batch) align better, even if they represent different treatment conditions. If you choose one common reference image to align all your other images against, some images will align easily, while quite a few others may be difficult to align.

The Alignment setup step therefore allows you to specify your alignment strategy. You can first align images within groups of images that are similar. You can group your images based on factors defined in your Experimental design, or build your own group hierarchy. In practice, you will align images within a group against a reference image selected for that group.

At a higher level, the different groups are aligned against each other by aligning their reference image against that of the reference group of a certain level. The reference image of the group that is at the very top of your group hierarchy is the global reference.

Select images based on strings in their names by entering the string in the Select box. Alternatively, select images by clicking on their name in the Tree view or Display area. Hold the Shift or Ctrl key to select multiple images.

Align all images to a unique reference image

If you want to go forward with the default alignment setup, just specify the most appropriate reference image (single stain) or gel (DIGE) as explained below. Then proceed to the Alignment step.

Group images based on a factor

To group images for alignment based on a factor defined in your experimental design, click the Group button and select an option. If you have defined several factors (and therefore have several options), choose the one that best clusters similar images together. 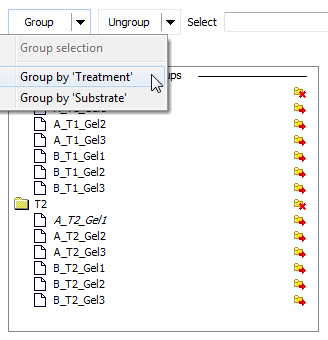 Note that grouping based on a factor is not available for DIGE data sets.

Build your own group hierarchy

If none of the factors defined in the Experimental design seems suitable to group your images for alignment, you can build your own group hierarchy: 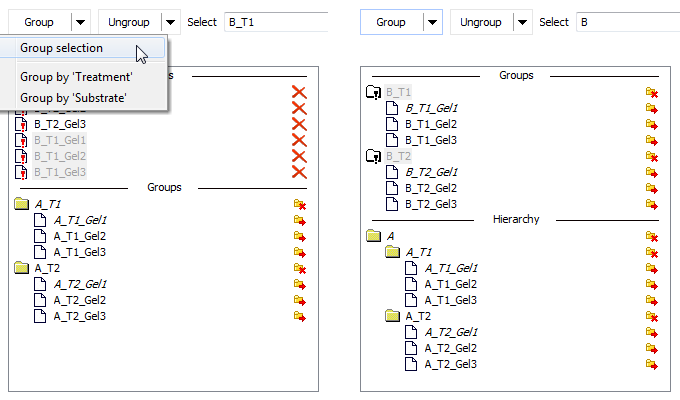 First, four groups A_T1, A_T2, B_T1 and B_T2 were created by selecting images based on character strings in their names (entered in the Select box) and then choosing Group selection (left). Higher level groups A and B can be created in a similar way (right).

To remove all or part of previously created groups, select one or several groups, click the Ungroup button and select the Ungroup all or Ungroup selection options.

Within each group, the image that appears first in the list is used as the reference image in the alignment process. To change the reference image, drag the desired image to the top of the list. As a result, it will be moved into the first position.

The group that appears first in a list of groups (possibly within a higher level group) is used as the reference in the alignment process. To change the reference group, drag the desired group to the top of the list. As a result, it will be moved into the first position.